Having obtained broadband aethernet, the plastic box that encases the interface to the tubes was seen to be aesthetically unpleasing to the eye.
A new design was called for. With wood and gauges. 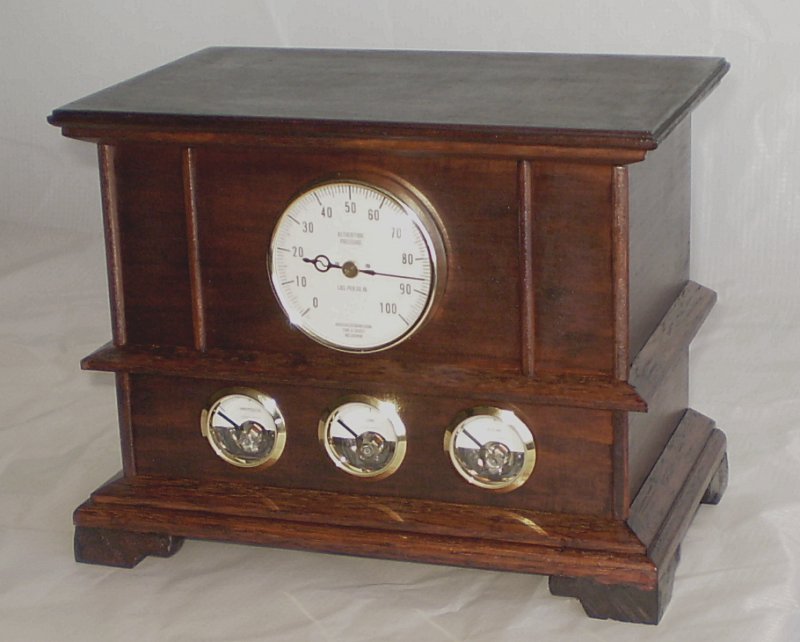 Pictured above is the original machine, the first rough doodled sketch, and the final plan with which the dimensions were measured.
The larger gauge, top centre, will show network usage. The lower three gauges will show the status of PPP, DSL and POWER. The gauges reflect the status of the LED's, from which the signal is tapped.

The bodywork in progress. Brass rings (watch bezels) to surround the gauges are obtained and the main gauge will be a converted analogue thermometer.

The lower three gauges are obtained by removing them from analogue battery testers. An inline resistor of a few hundred ohms enables a simple connection in parallel with the appropriate router LED light. So that the switch on isnt as mechanically severe, and to perhaps lengthen the life of the gauges, each one also has a 100uf capacitor placed across it.

The main gauge is more complex.
The router has LED lights for each of the interfaces - Wireless, USB, and four Ethernet connections. In the future, perhaps the signals from all shall be run through an OR logic gate, but for now only the Wireless LED has the signal tapped off it for use. This signal is buffered through an op-amp and sent to a CS8190 air core motor driver chip to drive the air core motor that is the main gauge. Air core motors to make gauges are discussed on Mikes Flight Deck.

Following ideas described on Mikes flight Desk, a suitable cylindrical magnet was obtained from Supermagnetman, placed on a shaft between two small ball bearings (from a small computer fan) and inserted into a brass sleeve. Enamelled wire windings are them made, and the whole thing placed inside a small tin (spaghetti, if you wish to know) and glued to the rear of the analogue thermometer. A new face plate is made for the gauge, describing its measurement as AETHERNET TUBE PRESSURE and the manufacturer as AIRKRAKEN ENGINEERING.